What the quiet eye tells the quiet brain: Linking perception and action 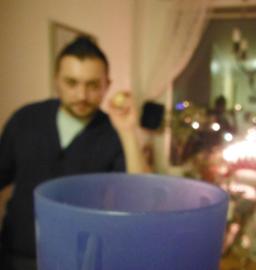 During my master studies I have been introduced to a fancy game, apparently quite popular among students: beer pong.

At the very basics, the game is about throwing table tennis balls at a distance into cups filled with beer. Each of the two facing teams has a set of cups by their side of the table. Once you center one of the other team’s cups, your opponents have to drink that cup. You win when you hit all cups so that the other team doesn’t have anything left to drink. As far as I understood, two main skills are equally important for succeeding at this game: alcohol resistance and good aiming. If you need to get better at the first one definitely don’t ask me – I rather have some tips for improving your aiming skills.

Our brain is made such that whichever visual projection falls in the fovea (the center of the retina) gets processed in a privileged way (Azzopardi & Cowey, 1993) – which basically means that we normally pay more attention to the things we are looking at. Gaze behaviour is indeed one of the mechanisms through which we orient our attention (namely, overt visuo-spatial attention; Posner, 1980). Being able to look at what really matters at the right time is then an important skill in every aiming movement, such as throwing table tennis balls into beer cups as well as golf putting or basketball free throws.

One of the differences between expert and novice aimers is indeed in their gaze pattern. First of all, during movement preparation novices look at many (more or less relevant) things while experts tend to look just at the target of the aiming movement. Besides, the final look at the target lasts longer in experts than in novices. This last fixation prior to the execution of the movement – which has been given the fancy name of quiet eye – seems to be quite crucial since motor planning occurs right at this time and several parameters such as movement direction, force, velocity, coordination and timing get processed (Vickers, 1996).

So far, the link between longer quiet eye and proficient performance in throwing and catching skills has been found pretty solid (Mann et al., 2007) and specific training programs have been developed in order to teach people what and when to look at (Vickers, 2007) – in this PBS documentary you can find out more about the training.

Great theory! But let’s say you want to put it into practise when the other team has now just one cup left to kick you out of the game. You seem to remember the main principle of focusing your visual attention to what really matters right now …but your opponents are setting their creativity free in order to distract you from the target…it is getting more difficult, but you need to score right now. In other words: what happens under pressure?

In such a situation we get some of our cognitive resources to be allocated to (either internal or external) task-irrelevant stimuli which are perceived to be threatening – basically we get distracted from the goal of our actions – and that in turn leaves us with less resources for processing what really matters (Eysenck et al., 2007). Our gaze behaviour gets negatively affected by that and we end up looking at more things in the proximity of the target rather than just the target itself, pretty much as a novice would do (Wilson et al., 2009).

Quiet eye training here comes in handy by making us orienting our visuo-spatial attention towards the real target of the motor execution, in the end making us more resilient towards the impairment effects of pressure (Moore et al., 2012).

Actually not just the eye but several other things too go “quiet” right before a great shot: brain activity suddenly shuts down (Babiloni et al., 2008), bringing along cardiovascular and muscular activity (Wilson et al., 2012). It looks then more of a quite brain rather than just of a quiet eye. Yet, could it be that quiet eye is an effective strategy for triggering the whole range of psychophysiological modifications, which set the stage for a perfect shot? My tentative answer is “why not”.

Quiet eye has yet to be (scientifically) tested on drunk people – and it will not be any soon I guess. But it has already been successfully implemented in several sports requiring precise self-paced aiming movements, ranging from golf putting to soccer penalties and basketball free throws (Vickers, 2007). So, either drunk or sober, I think quiet eye is worth a try at your next beer pong contest – why not?

About the Author: Germano Gallicchio is an EMSEP student at Lund University (Sweden) and Leipzig University (Germany). He got a BSc in Psychobiology and a MSc in Cognitive Neuroscience from the University of Padova (Italy) and has been working as research assistant in Sport Psychophysiology at the University of Birmingham (UK). Recently turned out to be a rock climber and a capoerista, his main interests currently lie in motor skill learning and healthy lifestyle promotion.
germano.gallicchio@gmail.com

1 Response to What the quiet eye tells the quiet brain: Linking perception and action